#1
Well it all started by getting invited to a end of the year dog hunt by a buddy of mine. Had several good drives that morning with several deer being killed by other standers. After lunch we went to the other side of the hunting club’s tract of land. Several packs of dogs had already ran deer in circles and to other standers, so the dog men told us (standers) to move down the road a piece and he was going to turn the dogs lose on the other side of us. Well he turned out the dogs and when they jumped the deer, they headed straight to where I was just standing! (500 yards away) So I took off running and when I got just about to where I was originally standing, I stopped, and could hear the deer coming through the swamp. I held my gun up in the road and when the bucknhit the road, I shot. He front flipped and that was when I seen how GIANT he was! He regained his footing and kept going. Shot a pine tree on the 2nd shot, must’ve been looking at horns on the 3rd shot because I hit him in the horns with a pellet, and the 4th shot he fell again. There’s nothing like experiencing the tradition of hunting deer with dogs. 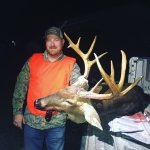 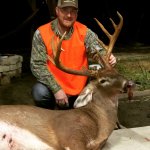 #2
Fine looking deer and good story. He was probable trying to sneak out.
"He seemed like a nice old man." Brownceluse

#4
No better rush in the deer woods than the dogs coming your way and you hear the brush start snapping, water splashing, etc. and it turn out to be a nice buck to shoot.

Thanks for sharing.
L

Congrats, nice buck.
If it hurts, stop doing it.

#6
Very nice buck. Congrats!!!
"The beauty of the second amendment is that it will not be needed until they try to take it." -Thomas Jefferson

#12
CONGRATS, never been on a deer dog hunt but that sure sounds fun. We stand hunt here in NEGA bow hunt mainly too , might be a little hard hitten one with a bow and dogs on his tail LOL.
You must log in or register to reply here.
Share: Facebook Twitter Google+ Pinterest Email Link
Top