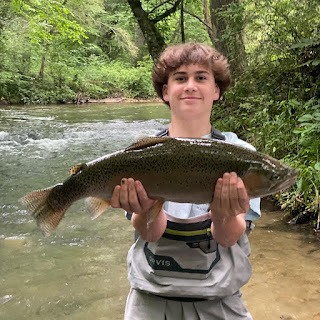 The upcoming week’s prospects are looking like a rerun of last week’s report. Trouting opportunities remain good all day on headwaters and tailwaters. Larger streams are still fishing fairly well in the mornings, when daily water temps are lowest. Remember a Pats Rubberlegs and pink Squirmy Worm if a summer shower “gifts” you with a slug of colder, dirtier water. And GAWRD is gifting GA residents with another free fishing day on Saturday. Speaking of gifts, don’t forget dear ole Dad! 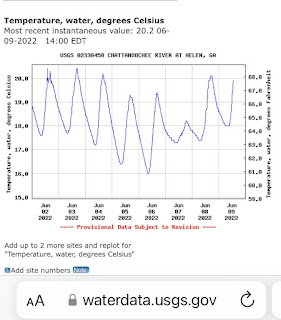 River bass and bream are approaching their prime time. Now it’s just a matter of ensuring enough visibility in those rivers for residents to see your poppers, streamers, and bottom-bumping crayfish imitations. If your river is a summer vacation spot for downstream reservoir stripers, they should be moving in now for that colder water.

Reservoir bass are still holding out on midlake humps, according to HenryC, while pond bass and bream are a best bet when the sun is low.

Now is a good time to think of your fishing father and “net” a nice gift for him. A new rod, reel, pack, or gift certificate can bring a nice smile to his face on Father’s Day.

They are still in good shape. Today’s lunchtime recon showed them crystal clear and just a bit low. We only had 3/4 inch of rain this week, so a clear-water stealth strategy will bring your best results. We like 4x tippet to our fluffy dry fly since it’s strong enough to pull down that rhododendron limb that grabbed your fly. Only if we get a string of consecutive refusals will we drop down to 5X tippet for headwater wild trout. Yellow, black, and green bugs will bring up plenty of lookers and hopefully lots of sippers. 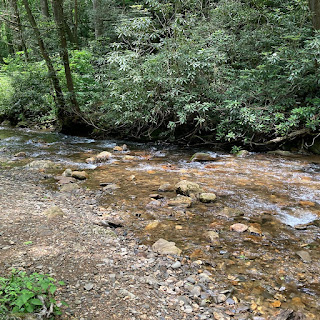 Stocker streams are still a good bet since GAWRD hits them hard up to the July 4th holiday. The agency then cuts back a bit as stream temps rise, flows drop, and angler numbers wane. That vacated hatchery space is also needed to accept thousands of four-inch fingerlings from other hatcheries that represent next year’s stocker crop. Get out there soon with your kids while the weather isn’t too hot, streamflows are cool, and the WRD trout trucks are rolling daily. Sign up for the weekly fishing blog and trout stocking reports (click on “trout”) here: 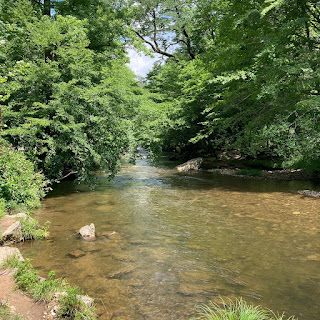 NC’s delayed harvest restrictions are now over, but there will be some stocked fish left in most streams for another week or two. Many DH waters also have resident populations of wild fish, so keep them in mind for a summer road trip. As long as we still get weekly showers and have some cooler nights, the wild fish in the national park and national forests will still have good appetites, too. Toss your terrestrials as a best bet for summer sippers. Daily park reports are here. Notice today’s glowing report. Colder water will do that…

Private waters on the Hooch and Soque have still fished well for morning guests. We will continue to watch water temps and ensure they are cool enough for fish health before taking trips.

Before the rain, Jake said Hooch rainbows continued to cooperate. “Long and light” was the usual key in the low, clear water. Small nymphs and soft hackles on light (5X, 6X) tippets drew the most strikes during the morning.

Joseph volunteered this morning (9th) as a guide for the GATU trout camp kids. He said rubberleg stones were working well. 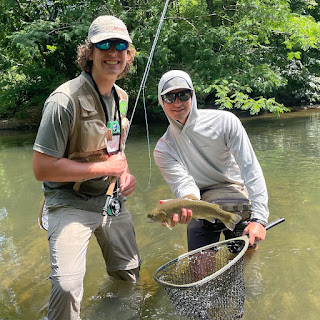 The recent rains are always a great river recharge. Israel reported: “The Soque was good in the rain for us yesterday (8th). The same ole junk flies (eggs, worms, rubberlegs) worked well in the higher flow, especially under the shade provided by the clouds.” 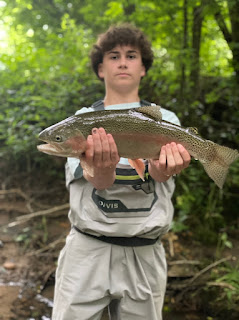 Palmer just got off the Soque after this morning’s trip. As the water dropped and cleared, he said they had the best luck on Squirmies and soft hackles.

Our staff fishing day was a fun one last Monday. Staff floated down the Hooch and caught a mixed bag of river residents and tourists. High hook might have been Israel, who tossed Boogle Bug poppers under the tree limbs for the abundant redbreast sunfish. The topwater bass bite was a bit slow, in this post-spawn period, but enough spots and Shoalies ate Game Changers and soft plastics to keep the anglers honest. Best one was a photo-shy 19-inch shoalie that slipped out of Jake’s hands before he could snap a pic. Bonus fish were the tourists, as a couple of Lanier stripers inhaled the Game Changers that were intended for Shoalies. 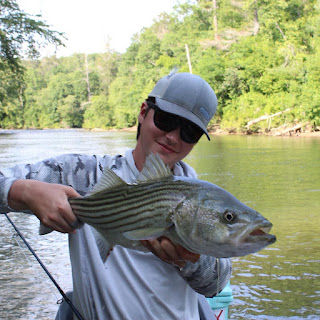 Athens Jay just returned to GA and quickly got back on his favorite bream pond. He reported: “Re-entry into the world was challenging. So I did a little after-work hydrotherapy. I tossed a Boogle bug with a Pat’s Rubberlegs about 8 inches under it. Both worked equally well.” 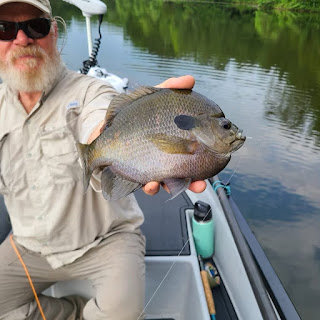 HenryC: “The topwater spotted bass fishing is starting to gain some speed. Spots are schooling some on humps over brush. Find the brush and you'll either see them schooling some or you can call them up with a topwater fly. The only thing you need to know is you must burn gas running from hump to hump to find these fish and also try to fish on a sunny day. They school much better on sunny days than overcast days. 6-8 wt fly rod outfits and either a Gurgler, Stealth Bomber, popper or Pole Dancer works best. You may have to tease the fish to take your fly so changing retrieves in order to dial into what the bass want is necessary and can change daily. This is happening on Lanier, Hartwell, Allatoona and most all GA lakes right now where spotted bass are dominant.” 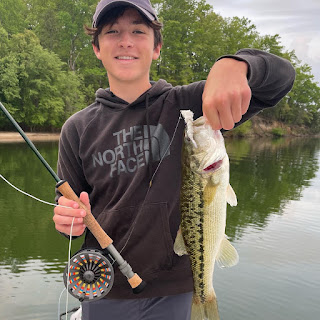 Athens Jay said his trip to the upper Mississippi was a fun one. Despite the high water, he and his GA buddy caught a good number of hefty smallmouths while fishing with Wildwood Outfitters guide Kip Vieth. Jay reports: “The water was high at the start of the trip so we fished “in the trees.” A. Floating line and a big streamer called a Goldie were the ticket. Later we got them on a white streamer called a Conehead Bunny Muddler or Muddy Bunny. Very effective fly! It fishes 1-2 feet below surface depending on retrieve. We were fishing around points and islands over rock fields in 6-8 feet of water. Kip was an awesome guide! 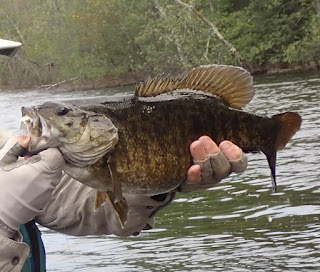 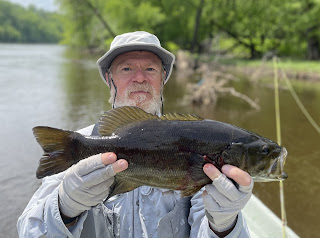 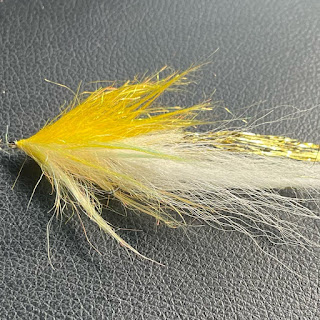 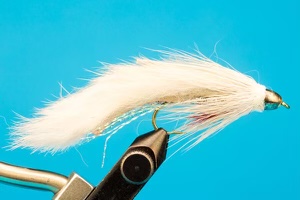