#1
I've been wanting a SOT fishing kayak for a couple of years and finally made a decision and bought one.

Most of the places I plan to fish, I have been fishing for years out of a float tube, so speed/tracking was not a major issue, but I did want something stable enough to stand in and had a comfortable seat.

I ended up with a Pelican Catch 100. There's not much info out there, but I did find enough user feedback and some videos via social media to help me make the purchase. The other Kayak I was considering was the feelfree lure 10. Since the Pelican was lighter, less expensive and had a more open floor space, it won out.

I should be able to get it on the pond next week to check it out.

#2
Looks like a mean little boat! Give us a review when you get it on the water!

All jokes now with 50% more walleye! 'Merica Man, back by popular demand!
​

#3
Yes, please let us know what you think of it.
I was looking at them the other week at academy. I like a 10' kayak and have been thinking about a new one.

#5
I bought a pelican catch 120 early last year and returned it for a perception pescador pro 120, they make it in a 10' too (pescador pro 100). Definitely a better made kayak. It's rotomolded vs. the glued seam mold from pelican, which I didn't like. Also the pelican was a barge, no speed whatsoever due to the hull design.

#6
Took the maiden fishing trip in the Pelican Catch 100 today and I couldn't be happier. This is my first fishing kayak, so I don't have anything to compare it to, but it was very stable, comfortable and awesome to fish from. I bought a 98" Magellan Flare paddle at Aademy when I bought the kayak and it worked great also. I was fishing a 7 acre pond and although I'm sure my paddling technique is pure rookie, I could move quickly from one spot to the other and the kayak was easy to keep on a straight course. I'm stoked. 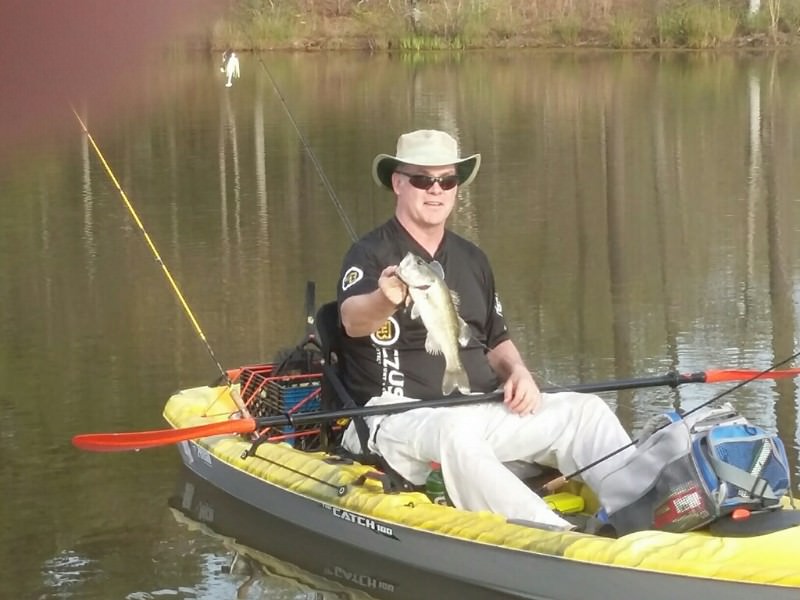 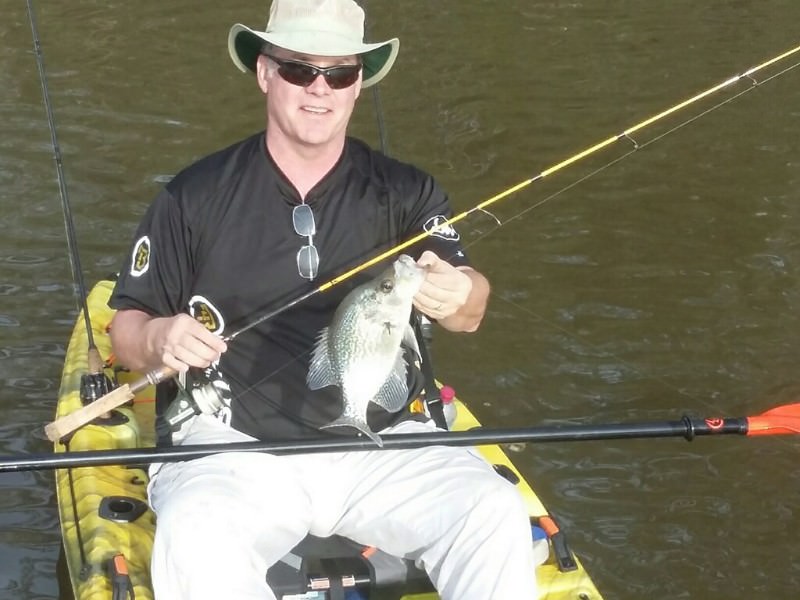 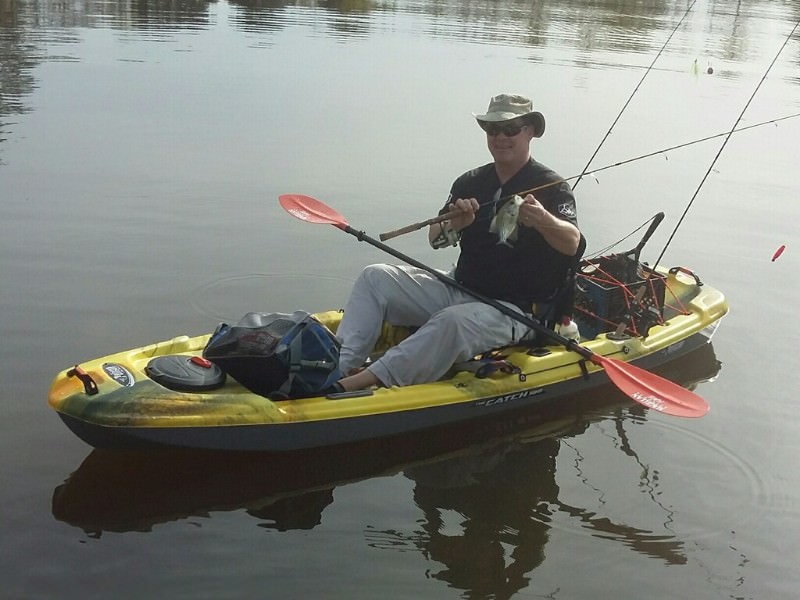 #8
Awesome,welcome to the madness.
Micropterus cataractae
"Bass of the Waterfall"

#9
Nice. Looks like a good little boat for what you're doing!
All jokes now with 50% more walleye! 'Merica Man, back by popular demand!
​

#10
First time on the Chattahoochee with the Catch 100. Really happy with how the 100 handled in the river. Rock solid stable and fairly easy to paddle up stream. I think a skeg will make a bid difference when trying to go fast upstream and I definitely need an anchor trolly. Trout were biting, and I put about 20 in the boat.

#11
I am loving this Kayak fishing. Another trip to the Hooch, this week: 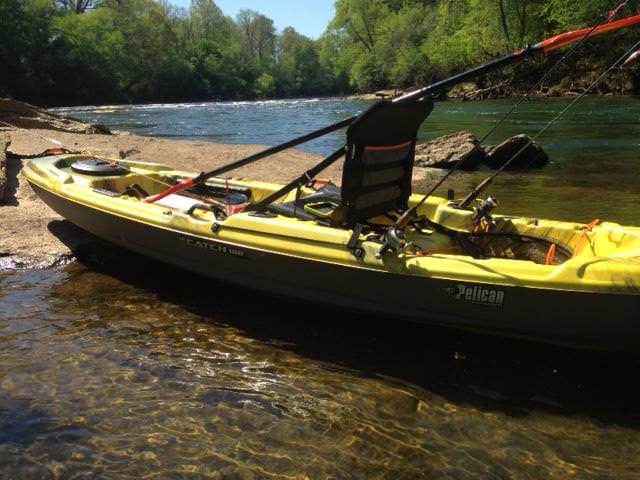 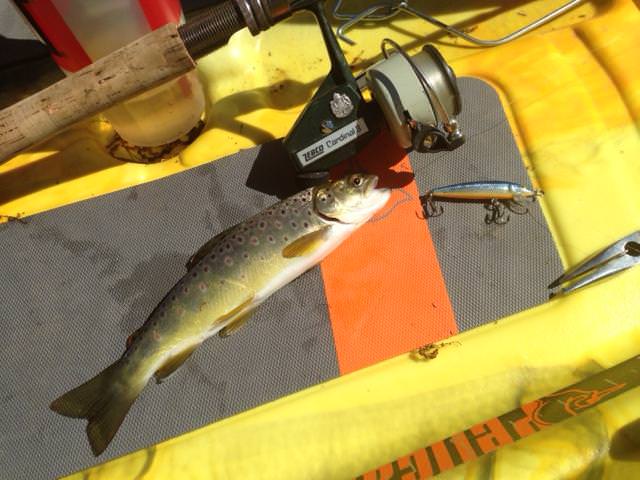 #12
Glad to see you started wearing that PFD, I always suggest wearing them in any water when fishing or paddling. Its easy to fall off and get into trouble really quick. There was several fishing kayak's that were rescued off the Hooch just a few weeks ago, could have ended up way worse than it was.
Fishing: A jerk on one end of the line, waiting for a jerk at the other end.
C

#14
You're putting that boat through its paces! Looks like you're a having a blast doing it. I need to hit The Hooch for some trout. Looks like the rumors about DNR upping the average size for stockers were true!

Teh Wicked said:
Glad to see you started wearing that PFD, I always suggest wearing them in any water when fishing or paddling.
Click to expand...
Was about to say the same. Especially on big, moving water like The Hooch. I'd rather float if something went wrong.
All jokes now with 50% more walleye! 'Merica Man, back by popular demand!
​

#15
Teh Wicked said:
Glad to see you started wearing that PFD, I always suggest wearing them in any water when fishing or paddling. Its easy to fall off and get into trouble really quick. There was several fishing kayak's that were rescued off the Hooch just a few weeks ago, could have ended up way worse than it was.
Click to expand...
I'm actually wearing a PFD in all of those pics. I usually wear an inflatable, belt type pfd that you can barely see in some of the photos as it's pushed around behind me.

#16
Can I ask I how big you are? I'm between 5'11" - 6' and weigh between 215 - 220 lbs depending on if I had a good meal or not. I've been looking at mostly rotomolded 12' kayaks but I feel like I might be able to get more value with a glued shorter kayak.
NRA = Not Real Activists
"Take the guns first, due process second." -Donald Trump

For the fishing I do (ponds, backwaters, slow moving rivers) the 10 footer is perfect. A 12 footer would be a bigger pain to transport (both weight and length) and I don't need the extra space for gear. My research of user reviews led me to the conclusion that this is the most stable of the 10 footers, which was very important to me. I value stability much more than speed for this type of fishing. 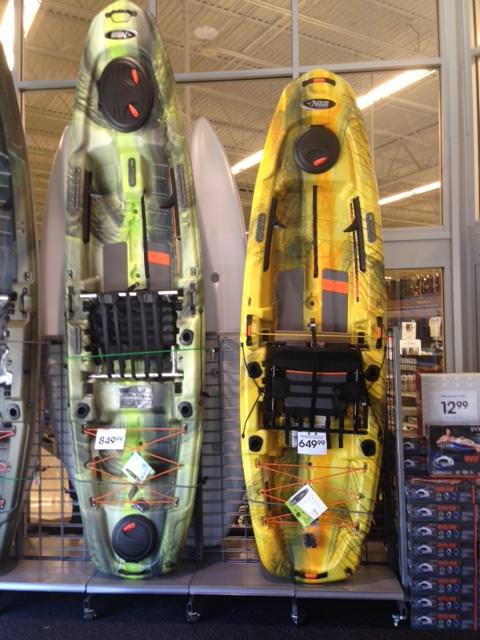 #18
Out on Jackson Lake for the next 3 days. Got in a little fishing today. I'm actually surprised by how much water I can cover in this boat.


Congrats on getting one that's perfect for what you wanted !!!!!
Manos arribas !!

#20
A short video. Catching a few small trout on the Hooch. I'm hooked on Kayak fishing.