#1
Saw plenty of does moving in Catoosa County Saturday and Sunday. One small 8 point buck out and about in a misty rain Saturday.

Buddy harvested a small 8 pt yesterdasy evening about 530 with a crippled up front leg. If it weren't for the injury he would've let it walk.

Anyone else have any luck?

#2
I hunted Walker for the firearms opener and saw no deer. My grandad hunted with me and saw a six-point and a fork horn. Not many deer are showing-up on our two trail cameras right now, but it is early.

#4
In Walker, fresh scrapes are beginning to appear. I saw a very large spike following a doe yesterday morning. By very large, I mean that he had the body of a big ten-point stud. The spikes were like goat horns. He was moving too fast through the timber for me to aim and shoot. I tried to stop him with my voice, but he wouldn’t stop, or even slow down a bit.
Last edited: Oct 29, 2018

#5
Hunted my front field last night. Didn't see a thing. Hour after dark friend comes up the driveway and said every deer in the county was in my field. Easily double digit deer. Such is the way it usually works.

#7
Watched a pretty 8 chase a doe Sunday in Walker county. Buddy of mine saw a lot of young ones chasing this past weekend.
Be a safer, smarter hunter today! So you can do it again tomorrow!
B

#9
Saw three different young bucks, one a small 8pt, yesterday morning sniffing around. Yesterday evening had three does in a field for the last 30 minutes of shooting light and no bucks to be found.

#11
Pulled in my driveway last night with 30 minutes of shooting light left. Five does in my front field were being pushed around by a BIG 8pt. Would have been my largest buck ever. Drove on up to the house, got a rifle, through a camo jacket over my dress clothes, and walked down to the field and tried to get close enough for a shot. Got within 250 yards and a doe busted me. Buck was behind a rolled hay bale and couldn't get a shot. She blew twice and all the deer took off for the woods. I stayed leaning up against a tree in the rain till I couldn't see and they didn't come back out.

Would hunt hard the rest of the weekend but I'm leaving to watch the Dawgs beat the Barn at lunch today.

Buddy is sitting in the pouring rain in Rock Spring this morning and said he's had small bucks chasing does around all morning.
Last edited: Nov 9, 2018

#12
Still too early in the part of Walker that I hunt. Two does browsed out from my stand Saturday morning and bedded down within sight, and remained there for over two hours without any bucks showing up.

I hunted a different stand today and saw three does at first light and one unidentifiable deer at 9:00AM. The wind shifted around 11:00 and killed any confidence that I had for seeing additional deer, and I began preparing to climb down. I lowered my daypack first, then tied the pull rope to my rifle and removed the shell from the chamber. Just as I had unloaded, I caught movement and saw a nice 10 point at walking towards my tree at sixty yards. I tried to work another shell into the chamber as quietly as possible. He either heard some of the unnatural metallic sounds from the bolt of my rifle or caught some of my scent, and immediately stopped behind a big tree. He eventually trotted straight away from me, tail down, and offered no look at a clean shot before he blended into the timber. I believe that either sound or smell made him nervous, but not both.

I would’ve had pictures to post if I had hunted for another five minutes, as a loaded .30/06 would have bettered my chances. Maybe I’ll see either him again or his daddy when they start getting more serious about finding a few does.

#13
Missed a really nice 8 pt last Saturday morning in the wind..that's all I have to say about that.
Hunt every hunt like it's your last.

#14
The past Saturday in the fog, this guy came cam to check out me blowing in my doe can and grunting like crazy. He has a lot of black fur on his back and face and dark antlers.

#15
jinx0760 said:
The past Saturday in the fog, this guy came cam to check out me blowing in my doe can and grunting like crazy. He has a lot of black fur on his back and face and dark antlers.
View attachment 950216 View attachment 950217
Click to expand...
Congratulations on getting a very nice buck. Did you happen to weigh him?

#17
I have been in the woods since this past Saturday waiting for something good to shoot, and have seen very few deer. I finally hit pay dirt this morning. I saw a small spike at 7:10 and a bigger spike at 7:30 that I tried to get in the crosshairs, but could not get him to slow down as he was tracking a doe. At 7:45, a nice eight-point strolled through my area and I stopped him by whistling, aimed quickly, then squeezed. He dropped in his tracks.

He was all rutted up with a swollen neck and black hocks, and I could smell him from thirty yards as he smelled like he had bathed in a tub of deer lure. Things are finally getting right at my place, and a team of wild horses couldn’t keep me from getting back in the stand in the morning. Good luck if you can get in the woods this week; it is a great time to be out there. I’m off now to resharpen my knife. 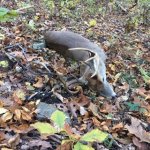 #18
Hunted morning and night for 5 straight days in Catoosa. Saw some small bucks chasing and pushing does around. No shooter bucks.
C

#19
Working in garage in the waning light last night. Got a tool out of my truck, looked in front yard, 150 yds away stands a mature buck, 8pt outside the ears. I had my rifle in the truck, was able to get it out.

Buck was stomping his foot and looked ready to bolt. I rushed a standing shot with not rifle rest at 150yds. Completely whiffed.

Struggled to sleep last night. Then this morning taking kids to school . . .. there he stood in my front field as drove down the driveway. I swear he was laughing.

#20
Saw 5 bucks today but not in bow range. Grunt tube and doe can couldn’t stop any of them. Checked the card on the camera and about chokedwhen I saw this beast! It’s hot in the deer woods now!